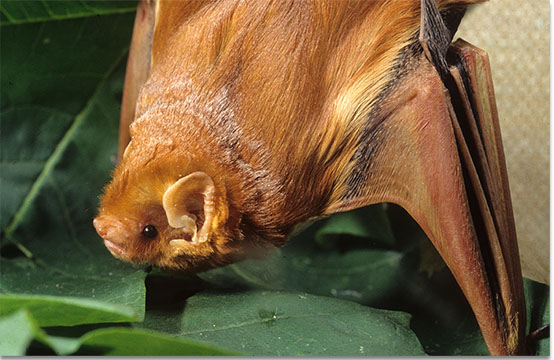 A recent presentation on bats to a group of Sullivan Elementary School second graders reminded me that this was a group which has, up until now, been totally neglected in my Critter Corner blogs. Time to remedy that oversight! It would be difficult to find a mammalian group either more interesting in regards to their biology or more maligned by the uninformed. They deserve some positive public relations time.

Currently there are three species of bats known to occur at Goose Pond FWA. Biodiversity surveys have recorded the red bat, little brown bat, and eastern pipistrelle. Whitaker and Chamberlain 1 speculate that the northern myotis, Indiana myotis, big brown bat, and hoary bat are also likely residents of GPFWA although they have not yet been recorded there.

Bats are members of the mammalian order Chiroptera. This name is derived from the Greek words meaning “hand and wing”. Indeed, examination of the skeleton within a bat’s wing reveals a pattern of bones and digits homologous with our own hand. The only substantial difference is that the phalangeal (finger) bones of the bat’s “hand” are exceptional long. Had we fingers like bats, we could sit in the recliner and change channels on the TV without the need of a remote. Stretched over these enormously elongated finger bones is a thin webbing of skin which serves to form the wings for flight, snagging insects from the air like a baseball player’s mitt, or enfolding the body while roosting. Bats are one of the few extant animal groups capable of true flight (birds and insects being the others) and are the only mammals which can do so. Flying squirrels, flying lemurs and other vertebrate called “flyers”, such as flying lizards, flying frogs, and flying snakes, are all gliders not true fliers.

There are around 1200 species of bats in the world. Upon venturing into the tropics one often finds nearly 50% of the mammalian fauna to be bats.  With an abundant, year-round insect supply, as well as many species of fruit bats (a group absent here) this isn’t surprising. Bats in general are divided into two suborders, one commonly called the insect-eating bats and the other the fruit bats. Although many members of the former group do eat insects – and are highly valuable economically  and ecologically as a result – other species of this suborder may be found which specialize in eating fish, frogs, nectar, pollen, other bats, and even blood. All of our Indiana bats (12 species) are insect eaters.

Bats range in size from the tiny bumblebee bat (aka Kitti’s hog-nosed bat) of SE Asia, which is only about an inch long and weighs less than an ounce, to the Pemba Island flying fox which has a wingspan of five feet and weighs over a pound.

Our red bat is about four or five inches long and weighs an average of about half an ounce. Like other insect eating bats, Lasiurus borealis uses echolocation to find its prey and to maneuver about in its environment.  This technique involves sending out extremely high-pitched sounds which are usually beyond our hearing range and, like sonar, reflect off of objects and potential food items and are returned to the bat’s ears. The returns are analyzed by the bat’s nervous system resulting in a detailed picture of its surroundings. See www.scientificamerican.com/article/how-do-bats-echolocate-an/ for an interesting explanation of echolocation, an amazingly complex ability. Most fruit bats, in contrast, do not echolocate and rely on eyesight to locate potential food and to maneuver through the rainforest. The anatomy of the insect eating bats and the fruit bats reflect this difference. The former tend to have very large ears and small eyes while the latter have small ears and quite large eyes. It should be noted that, even in the smaller eyed insect-eating bats, vision is good. The old saw about “blind as a bat” is but another example of how these creatures are misunderstood.

Red bats prefer scattered hardwood trees such as found in woodlots as their habitat. Their flight is rapid and they may forage for insects over water during which time they may also dive to the surface and drink as they skim along the water. Foods of the red bat include various kinds of insects such as moths, beetles, winged ants, plant hoppers, and flies. It is often suggested that bats are of great value in eliminating mosquitos. However the food habits studies shown in Whitaker and Mumford’s Mammals of Indiana2 do not support this. In the eastern pipistrelle for example, less than 5% of its prey was comprised of mosquitos and, for the red bat, mosquitos were not listed as a prey item at all.

The reproduction of red bats is interesting in that mating occurs in late summer (Aug./Sept.) but most young are not born until June. This is due to the fact that, as with many other bats, sperm is stored after mating and fertilization does not occur until shortly after emergence from hibernation.  One hypothesis for this delay is that late summer is the optimum time for mating due to the abundant food/energy resources available from insects. However with winter approaching it is not a good time to be producing youngsters. Gestation in bats is longer than that of mammals of similar size (45 days versus 21 days in a mouse). As a result, the bat’s offspring are more well developed at birth. Delayed fertilization and longer gestation result in bat offspring becoming active in concert with warming weather and increased food availability. The fact that our bats typically have only one litter per year, and just one or two young per litter, tells us a couple of things about them. First, this makes it clear that they  are slow to regenerate lost numbers. Thus human vandalism of winter roosts can be devastating (not to mention the deadly white-nose syndrome which has spread steadily westward in the U.S.). This low reproductive rate also suggests that these bats are not subject to significant predation pressure. Their nocturnal habits and secluded roosts normally protect bats from predators. Although I did recently find a bat skull in an owl pellet I was dissecting, bats do not really fit the profile of the terrestrial prey these nocturnal birds normally take. Bats are only rarely taken by other nocturnal predators such as house cats, raccoons, skunks, or snakes. Adult bats can attain significant age. One age record for our little brown bat is 34 years3; compare this to a life span of one or two years in the typical field mouse.

Another interesting aspect of the biology of the red bat has to do with its winter habits. We typically think of bats going into a cave or building during the winter to escape the harsh conditions, and lack of food, by hibernating. Although some red bats may winter in Indiana they more typically migrate. This is a behavior we normally associate with birds. Nevertheless, most eastern red bats migrate to more southern latitudes of the United States where their insect prey remains abundant and active. Other Indiana bats that make significant migrations include the hoary bat and the silver-haired bat. Recent studies have shown that migratory bats are threatened by wind turbines. Interestingly enough, the bats are not injured by the blades; these are detected by their echolocation. Rather the moving turbines create areas of low pressure adjacent to the blades. When the bats fly into these low pressure areas their lungs rapidly expand causing fatal hemorrhaging and death by what is called barotrauma4.

Bats in general get a pretty bad rap from people. Stories of vampires, the danger of rabies, bats flying into people’s hair, and wanton attacks certainly haven’t done anything to improve the image of these little mammals. Vampire bats do exist but not north of Mexico (yet?) and they most assuredly don’t assume human form during the day. All mammals can theoretically carry rabies but only five or six percent of bats tested harbor the virus. Of course this is an extremely dangerous disease and a bite from a bat, although extremely rare, should be taken seriously with medical advice being sought. Myths regarding unprovoked attacks on people or dives into a well coiffured hairdo are simply tall tales. Contrast these with the important work bats do in controlling insect populations. The number of insects bats consume on a nightly basis are astronomical and many of these insects are economically harmful. For example big brown bats, one of the most common species in Indiana, like to feed upon chrysomelid beetles. The crop damaging corn root worm is the larvae of one of these beetles. Here is a species that is definitely the farmer’s friend.

The diversity of form and habits among the Chiroptera is simply remarkable. Their economic and ecological benefits are undeniable. In a world in which wild places and wild things seem to be in steady decline, these fascinating mammals need all the understanding and help we can give them.